Blog - Latest News
You are here: Home1 / Terra Classic Is One Step Closer To Its Goal

While the Terra community is taking striking steps within the scope of the resurrection project, current developments and data are enough to excite the community.

The Terra (Classic) Casino application, which was launched last week, started to contribute to the community’s burning mechanism. Aiming to bring the LUNC price to new heights by reducing the supply, the community aims to realize this dream with a 0.2% burn/tax mechanism. The casino has managed to burn 1 million LUNC since it went live. The app is getting a lot of attention from the community. The betting platform burned 1 million tokens in 4 days. The platform also launched an interesting event for the community. “Don’t believe it! We’ve just burned 1 million LUNC. And in just four days! An amazing surprise is coming. Thanks to everyone involved in the process,” the community said in a statement. Terra Casino revealed the success of burning 1,096,015 LUNCs in a tweet on Friday. shared a picture.

Speaking about the critical success, TerraCVita Head of Development and prominent member of the Terra community, Rex “Rexzy” Harrison, expressed his excitement at Casino’s contribution and noted the record numbers the platform could achieve in LUNC burns if they get enough support. Rexzy also pointed out that the 1 million LUNC burns only apply to on-chain deposits and withdrawals. The manager explained, “Wow, TerraCasino has burned 1 million LUNC in a short time and that is just on-chain deposits and withdrawals.”

In response to Terra Casino’s previous tweet, Rexzy stated that if the platform is supported more, greater burns could be made. The critical development received mixed reactions from members of the LUNC community, with some applauding the newly launched platform for its success, while others criticizing it for its low burn rate and failure to confirm the authenticity of the burn claim on the blockchain. It is worth noting that the 1 million LUNC burned was worth an estimated $176.

Concerns about transparency were raised on the first day the Casino went into operation. Rexzy announced the launch of Casino last Thursday, claiming TerraCVita has the potential to burn up to 26 billion LUNC in 6 months. The casino plans to burn 0.2% of all LUNC-related betting volumes. Analysts stated that LUNC could be successful because of its reliable roadmap. 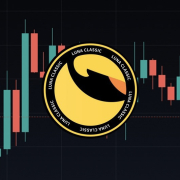 What Can LUNC Do for the Rest of the Year?

A New NFT Marketplace on the Terra Classic Network
0 replies